The main purpose of my visit to the Philippines was to speak at a global peace conference that was to be held in Mindanao. The time there was well-spent and I had a great opportunity to express my views before a large group of people, which was quite fulfilling.

If you search on wikitravel.org to plan a trip to Mindanao, you will find only the following:

A blank page with no photos and a warning stating only that the area was declared “the world’s most hazardous area for journalists.” The only other information shared about the area is that it is an island. I see such things as blank coloring pages begging to be filled in, and I accept the challenge. I don’t believe that there are such a thing as evil people. We all share a common heart, and it is my life goal to encourage the pursuit of this realization with the rest of the world. I spent several days on this island and found the people to be just as warm and beautiful as any other people I have encountered on this planet. We are all one family.

I am not arguing that there are no dangerous places on the planet. Indeed, while in Mindanao I slept in a gust room of the Sultan’s palace and was escorted around by a team of armed soldiers, and although most people in the streets would probably be happy to see me and take part in a meaningful dialogue, there would probably be a handful who without a doubt would scoop me up and hold me for ransom, or just plain murder me out of belief in some principle.

I do not hold this later group of people to be bad, however. Whether it be a response to past aggressions carried out by the USA or a belief that they are furthering the goals of some sort of cause that they stand for, violence always had and always will have its justifications. But peace is beyond justifications. Peace transcends the rational mind and even the care of survival. Peace is discarding our mistrust for our fellow man and our cares of history and looking at another human being in the eyes with love, as if to say “I am you.”

I recall a trip I once made to the city of Marakkesh in Morocco. Just a few weeks prior, a bomb had been detonated in the upper terrace of popular tourist cafe in the city, collapsing the floor and killing scores. I was traveling to the city by train, and a man who had been silently sitting next to me eyeing me from time to time broke his silence and spoke.

“What are you doing here?” he asked me flatly.

“Don’t you know that it is dangerous?”

“I am here because I love Moroccans and because I think your culture is beautiful,” I replied, just as matter-of-factly. I explained further. “The cause of all violence in the world comes from division, and division stems from mistrust in our fellow man. As long as there is mistrust, there will always be an excuse for violence. I do not wish to live with even a molecule of mistrust in my heart, for even a molecule of this poison can pollute a whole ocean of purity. In the face of exploring life and its expressions on planet earth, danger does not concern me. If I should see an angry person with a bomb coming for me, I would not run, but would move towards them and embrace them with all of my heart.”

He sat and listened, and after some time, tears filled his eyes. When he initially opened his mouth to speak to me, I could tell he bared a long history of hate on his back. I don’t know what became of him after this train ride, but during our conversation, our world was one of peace. His hate had been lifted, and he was light. This is the sort of world I wish to live in.

I’m not sure whether or not I believe that “world peace” is a livable goal. Quite frankly, I stopped thinking about this idea sometime during my years as a junior high school student. We are individuals, and we can only truly interact with individuals; the idea of “world peace” is just too abstract and broad, and all of the governmental organizations in the world that are purportedly working towards it seem to be the cause of all of our world’s dysfunctions. What I believe in is peaceful hearts, and the power to spread the state of our hearts with those whom we interact with. All feelings are contagious, both good and bad, and the state of our hearts is determined by what we choose to keep inside of it. We may say that certain things have happened to us have been inserted permanently into our world views, but anything can be let go of if we will it.

The path of life can be winding and confusing, but when we ground ourselves in the will to spread love to other beings and to live for this purpose alone, all fear, mistrust, and confusion in life evaporates away like a mountain’s mist exposed to the morning sun.

View from the sultan’s palace 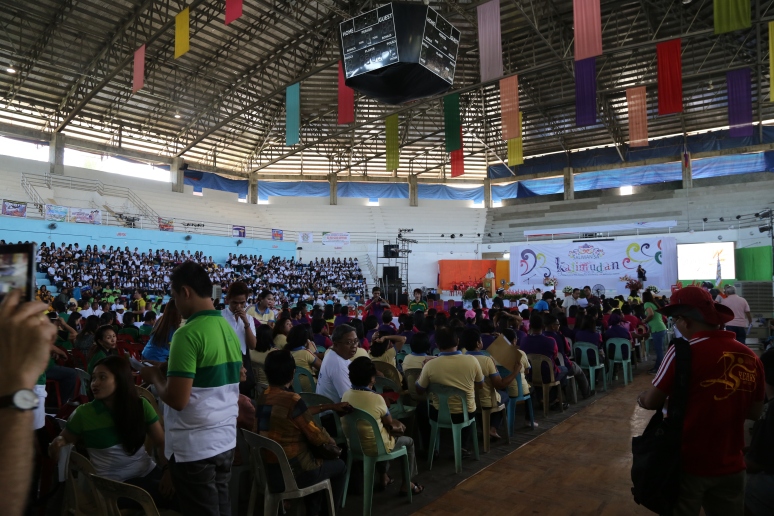 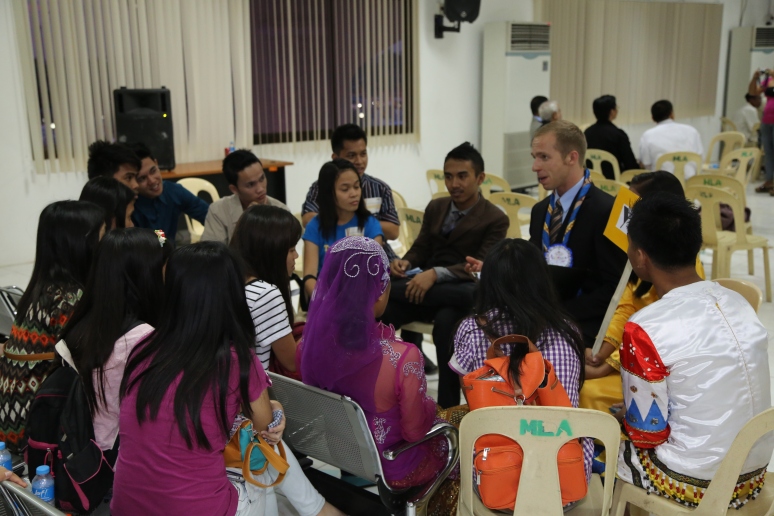 moderated a discussion panel of local university students. the youth had a great energy and good ideas for the area.

go to asia and you’ll quickly find yourself an object of several hundred thousand facebook pages.

received an award from the governor of Sultan Kundarat (above)

The provincial capitol of Sultan Kundarat, where the conference took place. Below is a brief view of light tests being conducted for their largest annual festival, Kalimudan.

Artwork of high school and university students of the local area.

3 thoughts on “The Philippines: Mindanao”