There are deer all over Nara, which in itself isn’t something new to me, as I am from Virginia,  also a land of deer; however…..these deer are different. For one, they are quite vocal and will literally scream at you if they want food or want you to get away from them. I’ve had a deer run above a path where I was running for at least a mile once, screaming the whole time at different vantage points, I assume to warn his friends about my presence….

In the countryside, the deer are just as skittish as they are anywhere else in the world. However, in Nara city, the deer are regarded as holy animals, and there are literally thousands of tamed deer than walk around amongst humans throughout the city (half of which is just a giant pedestrian park) and the environs of its temples. There are special deer-biscuits sold by street vendors that you can feed to the deer, and all of the deer (there are thousands) have been trained to bow before receiving these treats. Every october, the male deer have their antlers cropped so they don’t impale any unsuspecting city-dwellers.

Backyard of Tōdaiji temple in Nara, which holds the largest Buddha statue in all of Japan. 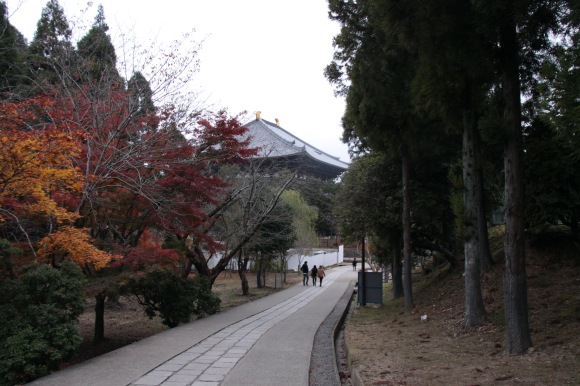 a friend and I tried to see how many deer we could get to follow us. They have a short attention span so it isn’t so easy….